If you have ever been to Ireland you will know about the beautiful people, and stunning landscapes. Being half Irish I was incredibly excited to plan this trip and explore more of this wonderful country.

The thing about camper van adventures is…they begin the moment you lock the front door of your home and buckle yourself in. Van loaded with EVERYTHING you could ever need, hearts full and minds free.

We booked the early ferry from Holyhead to Dublin, The children were 6 and 2 so we got a cabin, always good to have a base! We could see pickles from the window on the deck of the ferry and Doug the dog was curled up on the drivers seat with lots of food and water to ensure his survival!

We drove cross country from Dublin to Galway, where we stopped for lunch and had a walk. 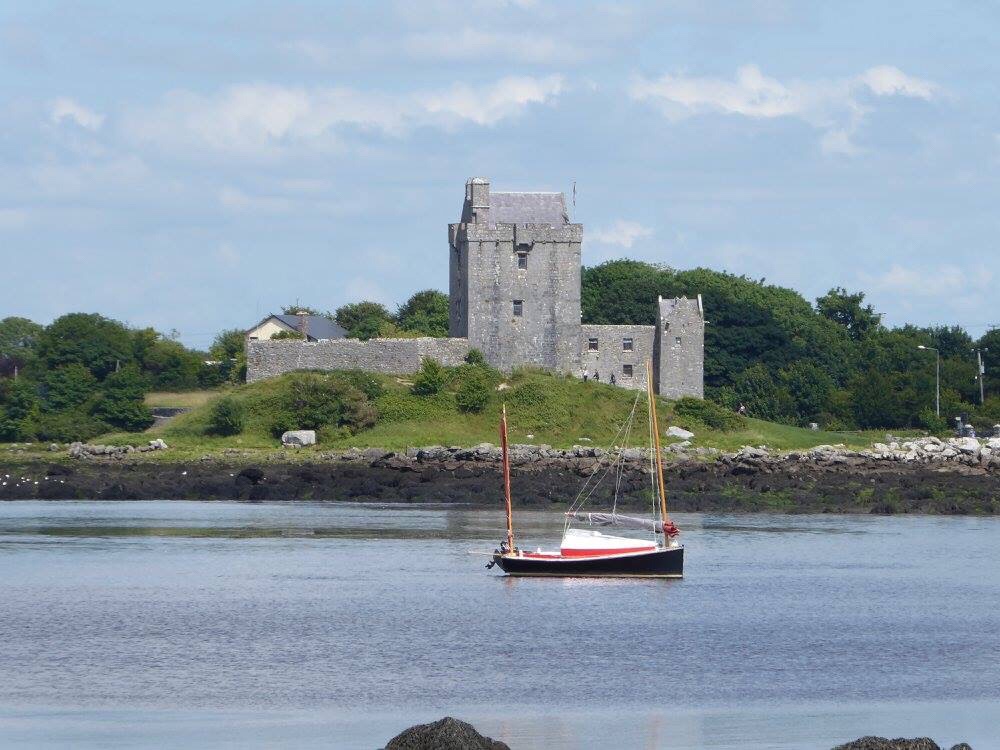 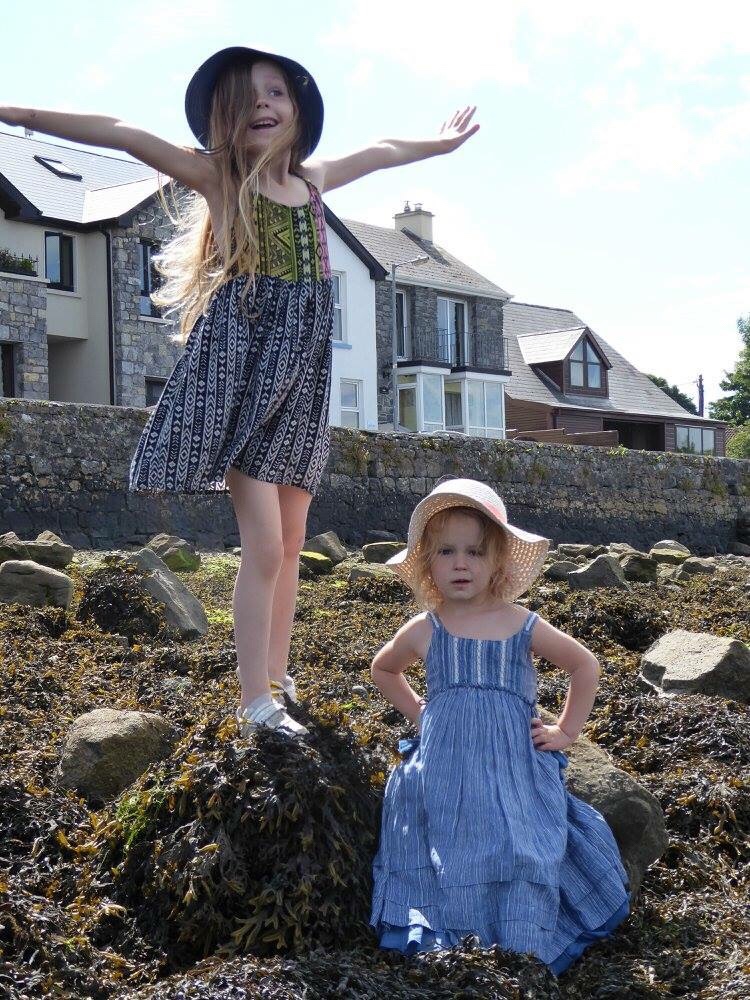 Our plan was to ‘Wild Camp’ our way down the Wild Atlantic Way, so we were keeping our eyes peeled for good spots for us to park up and camp.

To be completely honest it was a bit nerve wracking finding a place to park up for the evening! We were a bit worried about annoying the locals or being asked to move on in the middle of the night or something. Lots of the beach car parks had height restrictions so we couldn’t go in, in the end We found a lovely little lay-by next to a field full of gorgeous cows and close to the sea! Perfect!

The journey along the coastal route was wildly stunning at every turn. 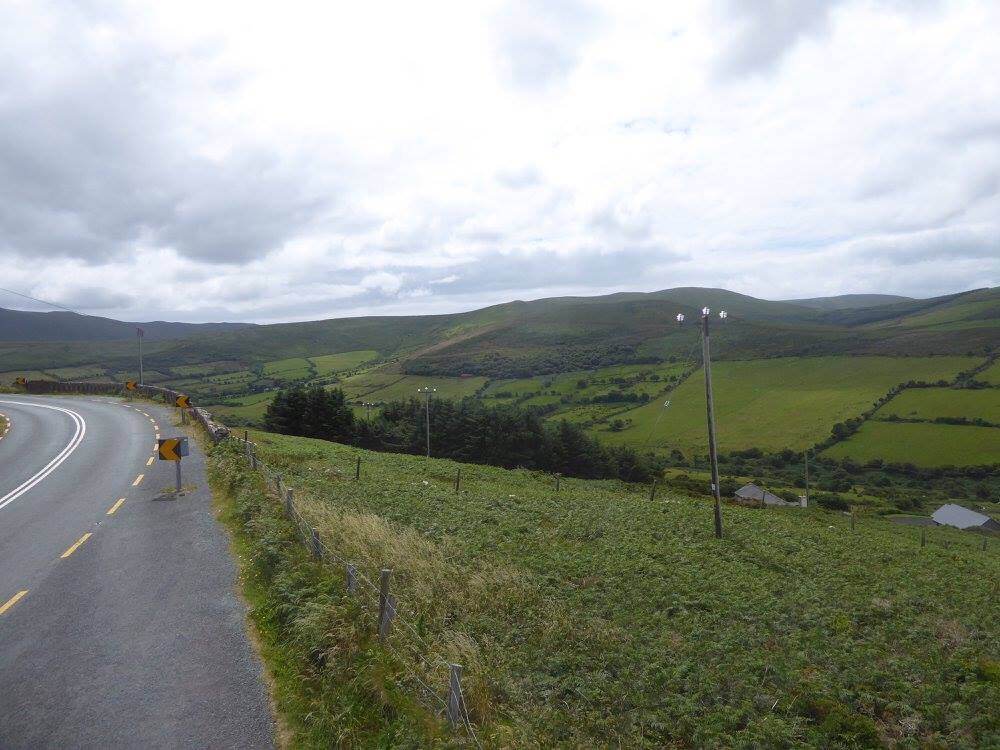 Next stop the cliffs of Moher. We decided not to go to the touristy entrance and found ourselves twisting and turning down a single track road listening to Johnny Flynn and feeling absolutely free. We parked in someone’s field for a couple of euros and marched off in search of the magnificent cliffs. 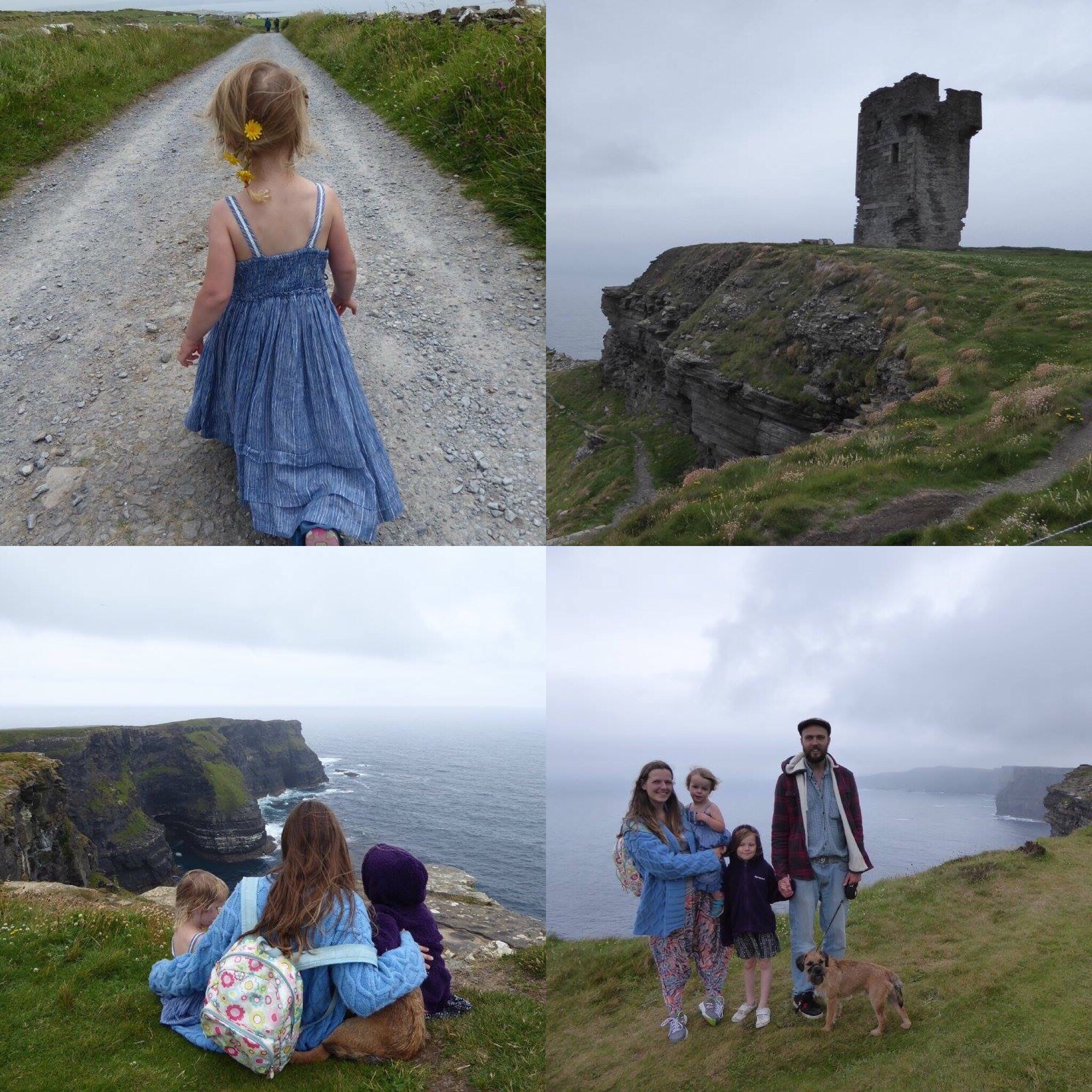 On to our next stop- Spanish Point. A few years ago I came here with my Dad to a traditional Irish music festival and I’ve always wanted to come back. Last time I was here I was walking along the beach and saw a wild dolphin swimming close to the shore and I just went in! Fully clothed!! It was magical to be so close to the gorgeous creature, two Irish women watched as I went in, saying I must be mad and I said it’s not everyday you get to meet a dolphin! 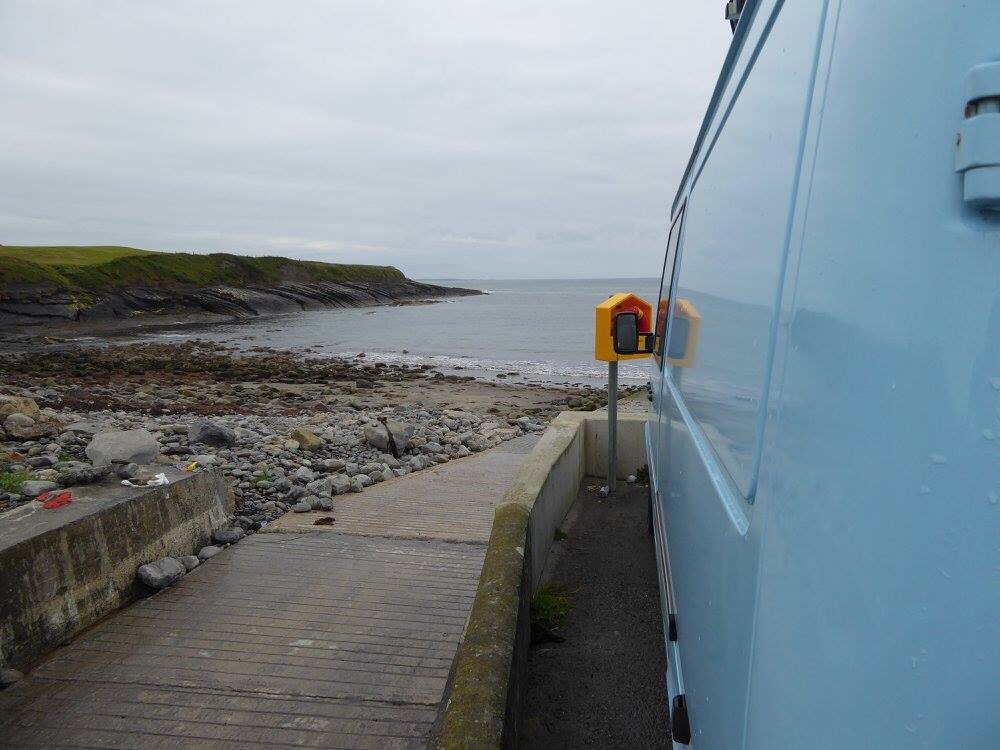 We found an awesome parking spot right next to a slip way…panoramic sea views. My Dad called into us for a beer as he was in the area for the Willie Clancy music festival. Early the next morning we watched as an old gent of about 70 wandered down the slip way in his speedos and just dove in!! Blumin heck, that must be freezing! We had a chat with him after his swim and he gave us a tip. Count to 15 and by then you will be used to it. So in we went for a swim and it was bloody freezing, but the old chap was right after 15 seconds it’s not so bad. After our swim Bruce lathered himself up in shower gel and ran out in the rain for natures shower.

We travelled about 2 miles up the road to Miltown Malbay for the trad fest! We stayed a couple of nights in a car park with lots of other camper vans all visiting for the festival. It was great to be back, I saw a few familiar faces and enjoyed being with my girls and Bruce and my Dad. The atmosphere was buzzing! Elsie even got involved in the session with a shaker. 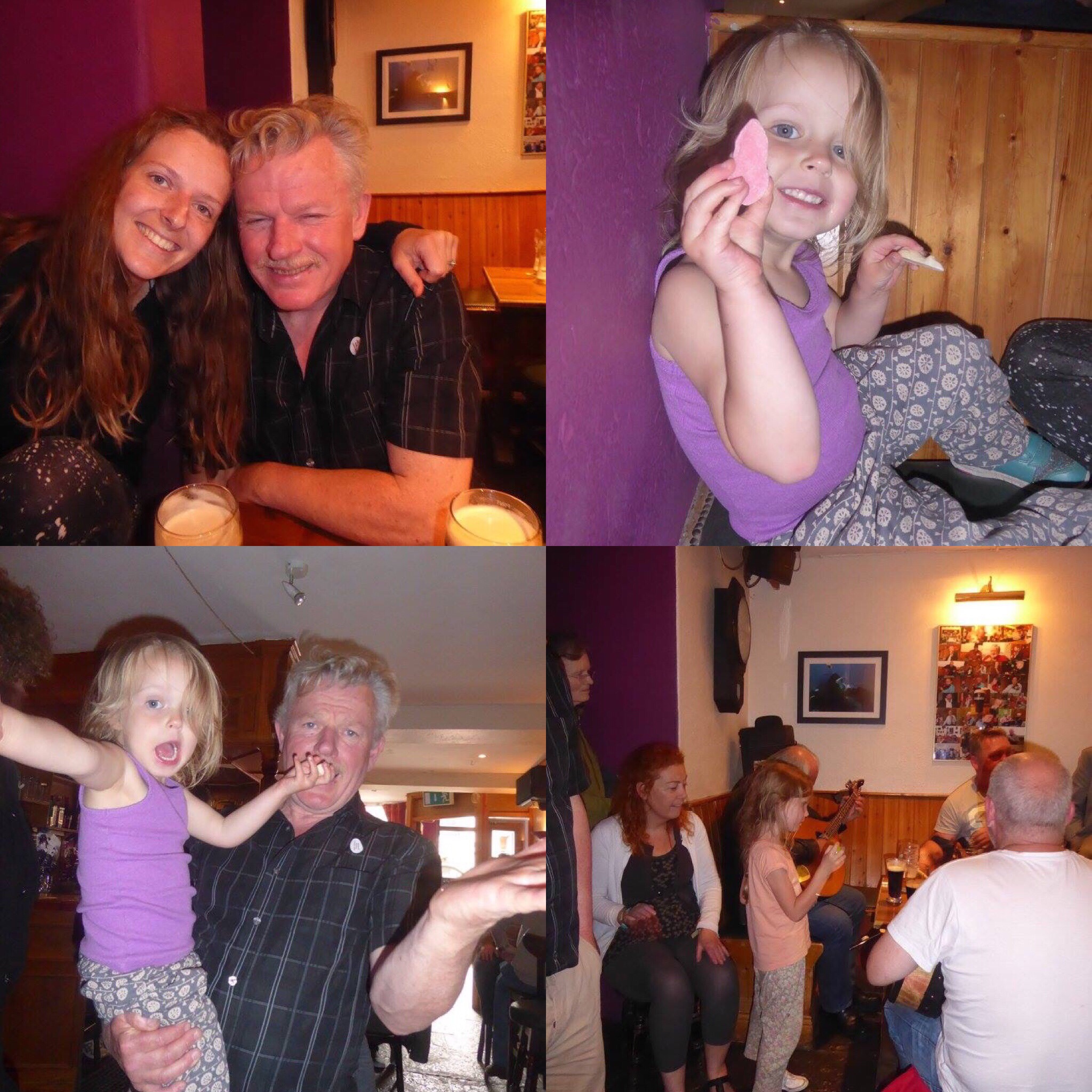 We stayed for the day on miltown malbay beach so Bruce could surf and the children and I had fun on the beach. 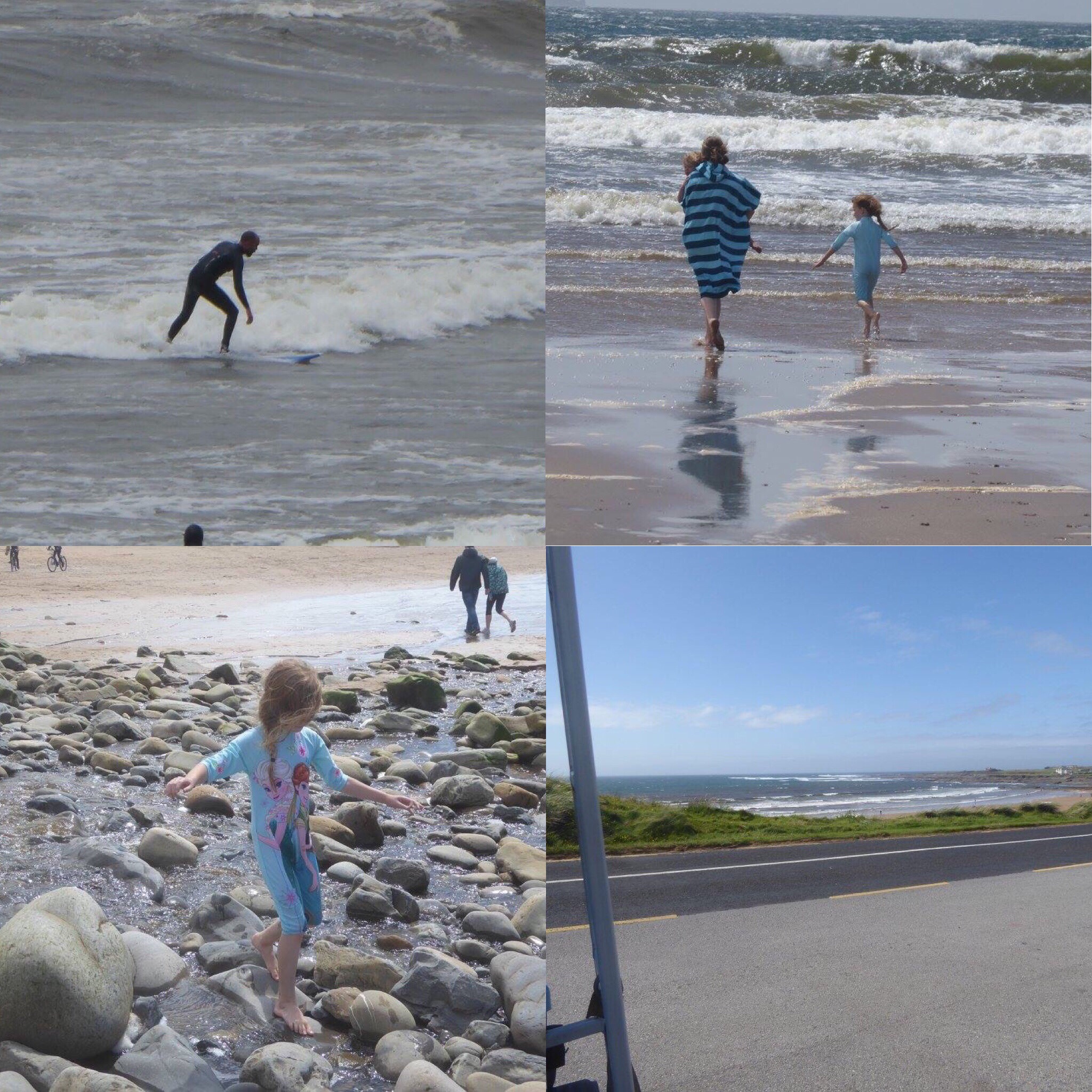 We caught a ferry from Killimer in county Clare that took us to Tarbert in Co Kerry saving us a long journey inland just to cross the river.

Our next stop was a bit of a strange one and I can’t remember where we were exactly but somewhere between Tarbert and Dingle. We were really tired and needed to stop for the night, we jus couldn’t seem to find a good place. We ended up parked next to a toilet block not far from a nice beach. The next day we took a wander through the dunes and played on the beach. Bruce even took a shower. 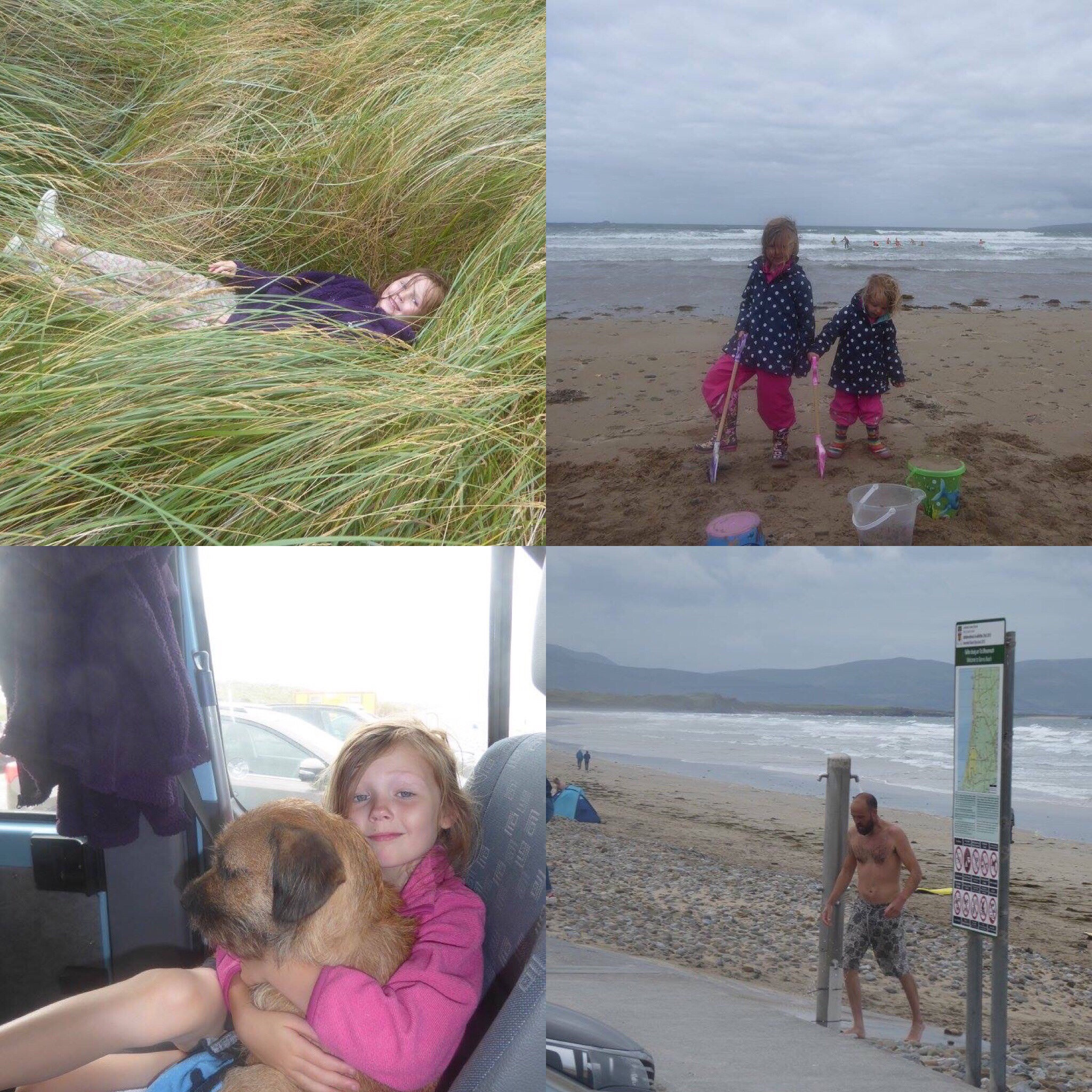 The Dingle Peninsula. We parked up in the centre of Dingle and it was extremely busy and full of tourists and souvenir shops, we sat on a bench amid the Chaos and ate some chips before venturing futher a long to find the right spot. We parked up for a while and went rock pooling. It was absolutely breath taking every way you looked. It was like stepping back in time, nothing had been touched. The remains of old stone walls checkered the hills. Stone farm houses scattered about sporadically gave such a rich sense of the history of the place. We tried to follow a route called Connor Pass which is Ireland’s highest mountain road but pickles was too big so we turned back. We journied on until we came to Slea head. This was one my favourite places of the entire trip for a few reasons. It is the furthest point west in Europe. It is completely and utterly stunning and it is where I found out that my beautiful Niece Jorgie had been born. She was 4 weeks early!! I wasn’t supposed to be a few days in to a 3 week road trip!! I was an auntie and my little sister was a mummy! 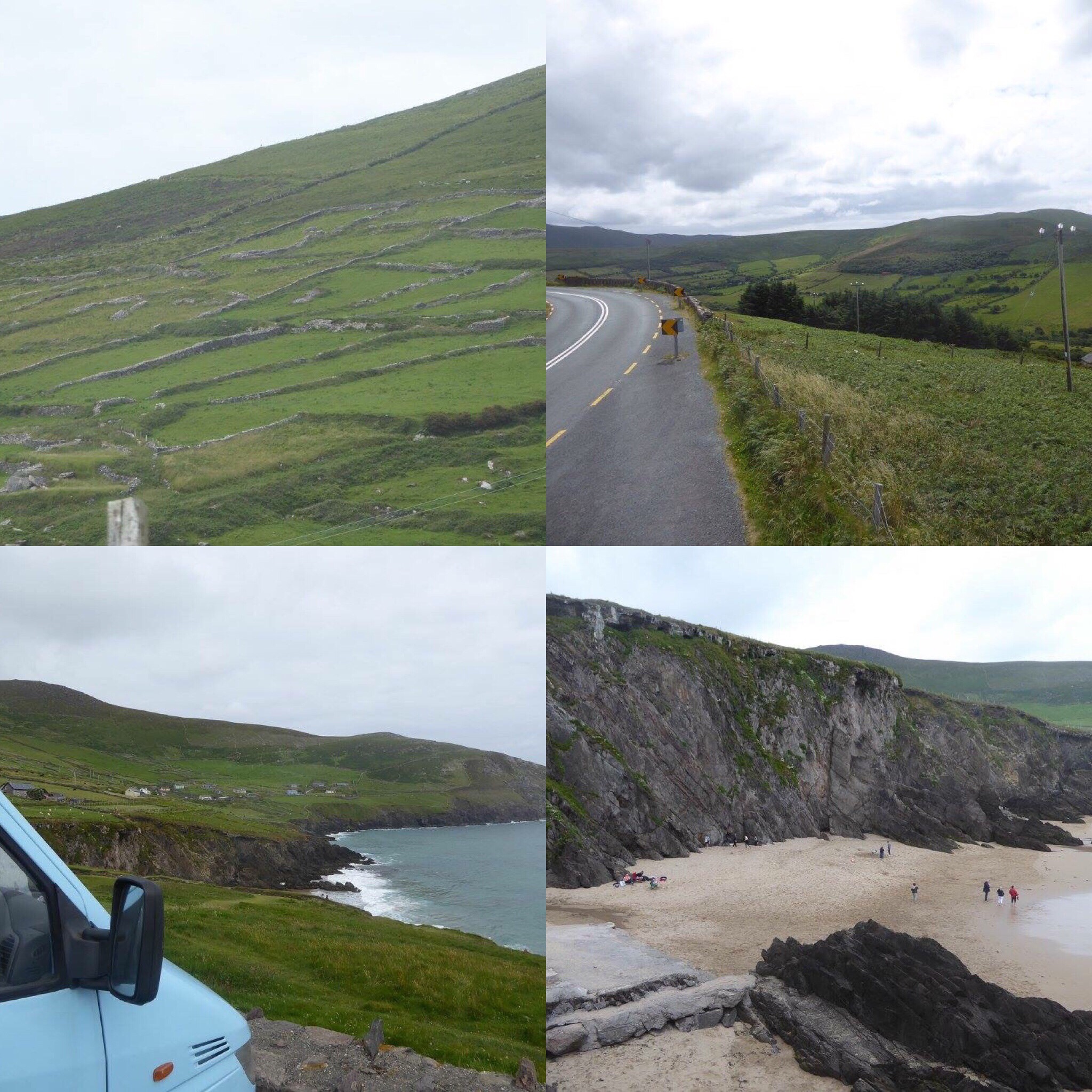 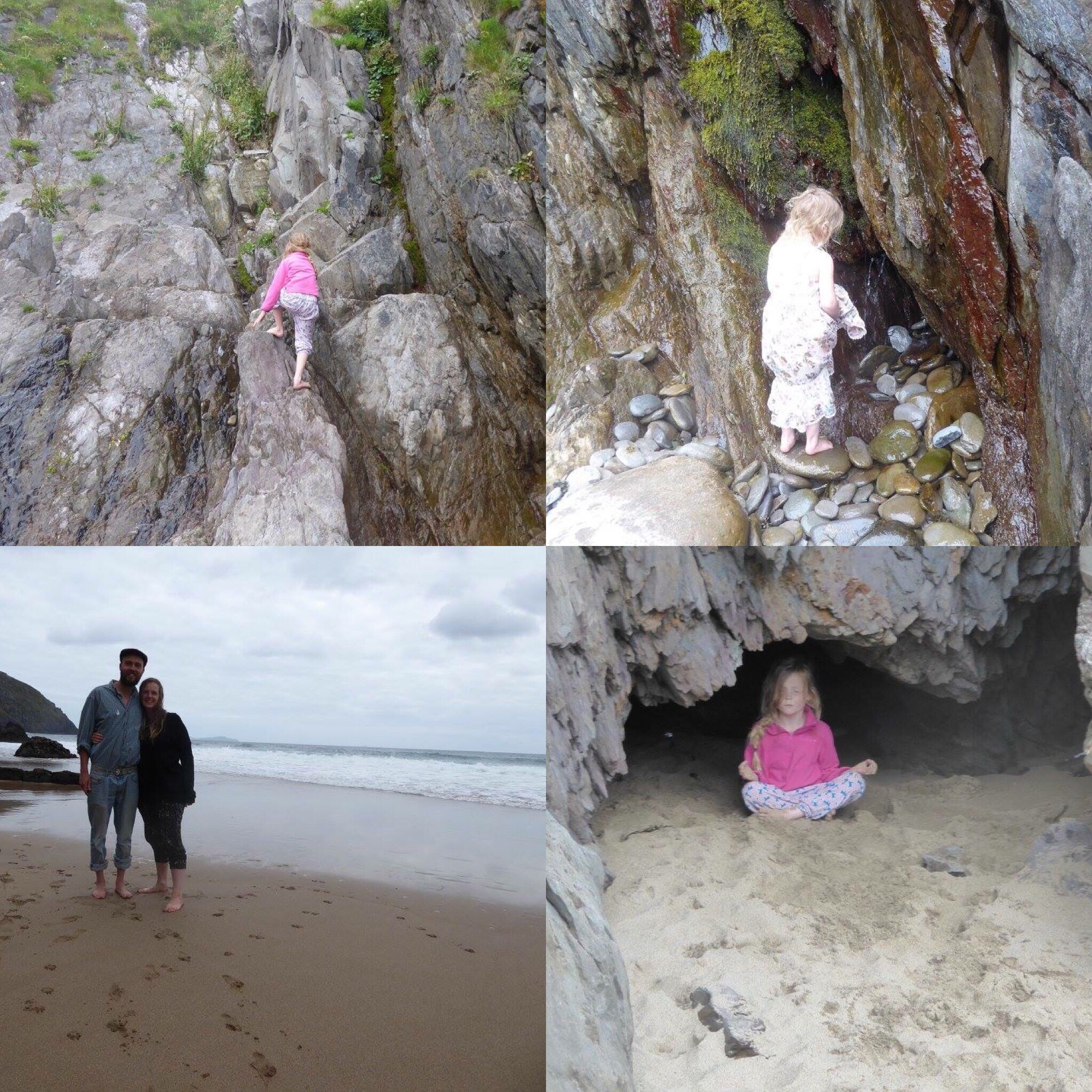 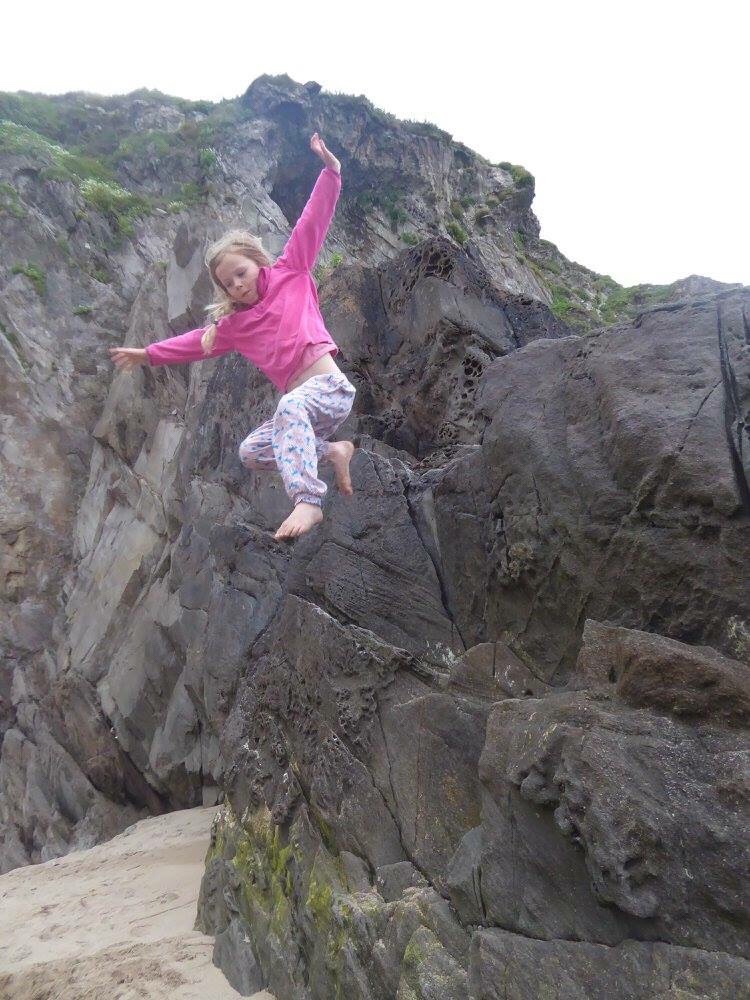 Back round the other side of the mountains. We parked up on Inch beach, a little bit worried we might get stuck in the sand, as one camper did, or the tide might come in!! Other than that it was another perfect place to stay.

The ring of Kerry, Iveragh peninsula. Another peninsula…could it really be any different to the last one? Yes , yes it could, totally different. This one was real Irish countryside, thick and lusciously green, totally beautiful. We headed for port Magee, parked up in a car park and went to the local pub for food and a few drinks. From port Magee you can get a ferry over to Skellig Micheal where you can climb the 600 odd steps to see the monastery believed to be from as early as the sixth century! Now more famous for appearing in Star Wars. We decide that we would give it a miss, I’m not sure how far up we would have made it with an almost 3yr old and a 6yr old in tow! After a nice evening out we went back to the van and were treated to a lovely fire work display. 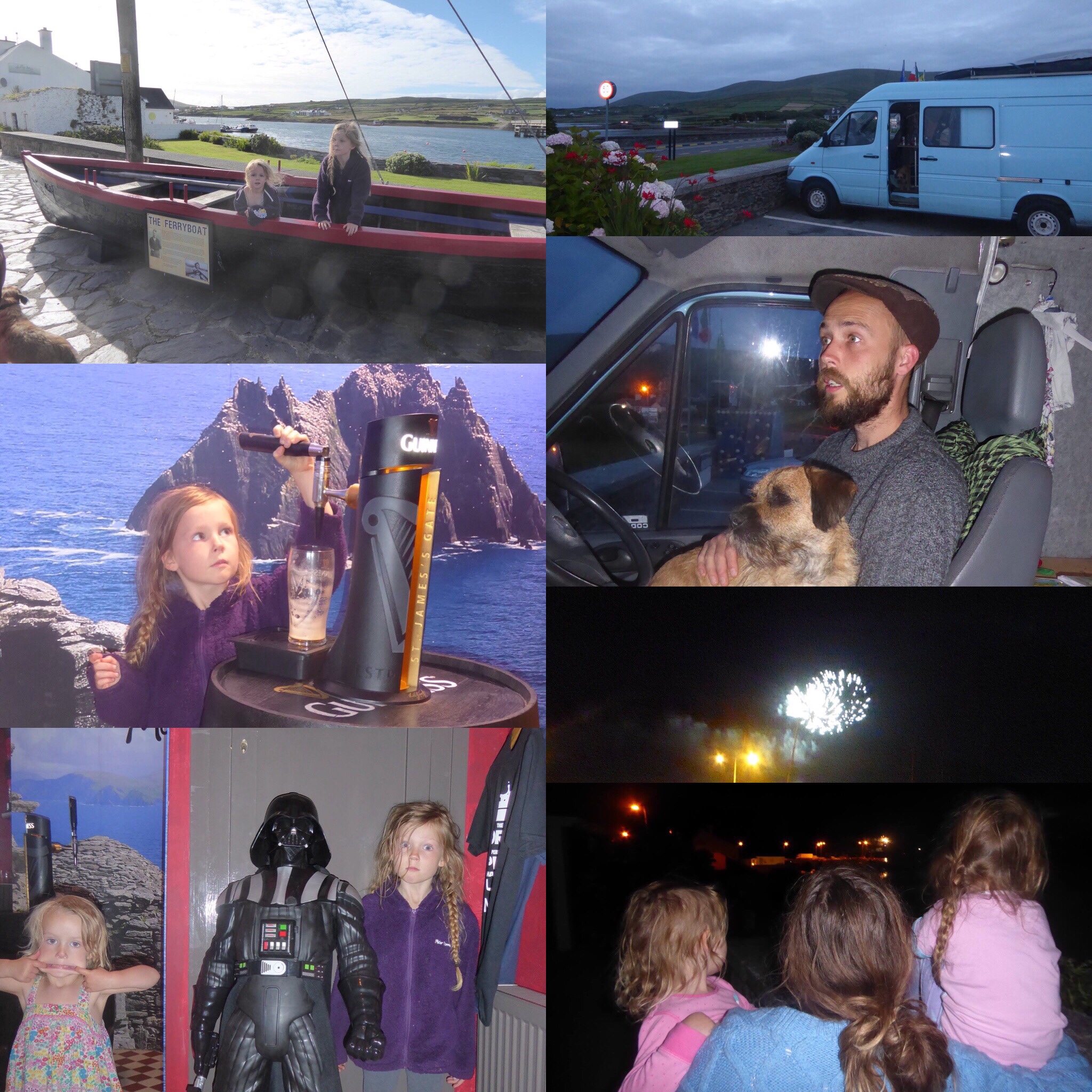 The next day we drove up an insanely steep zig zaggy road to see the cliffs of Kerry, hoping to spot puffins. We didn’t catch a glimpse of a puffin but the views were well worth it. 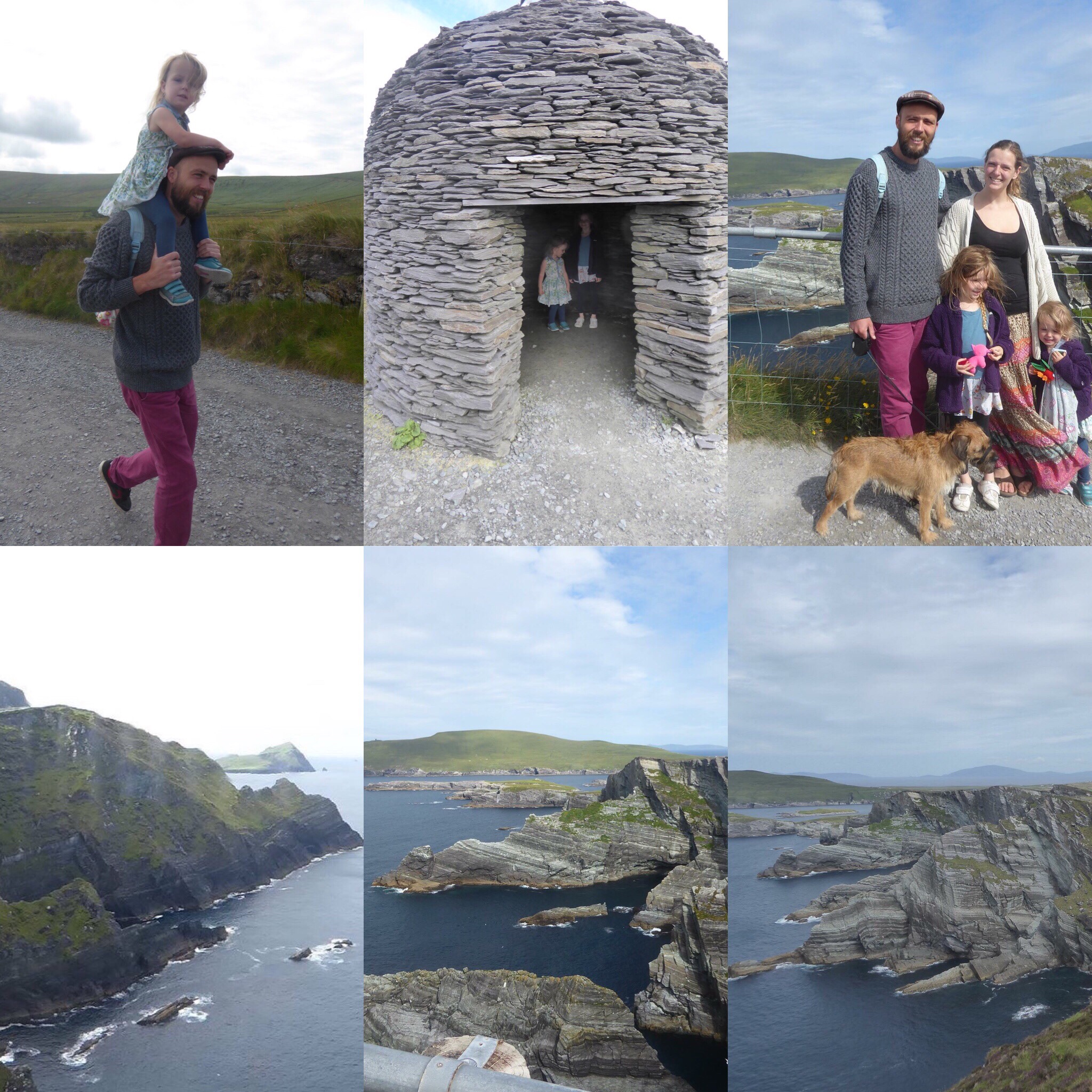 On to Ballinskellig, we swan in the sea and explored The McCarthy Mor house- Ballin Skellig castle. McCarthy is my maiden name so it would have been rude not to! We’d been on the road for just over a week by now, the washing was mounting up and We all really needed to have a shower. So we decided to book a night on a campsite. We had wonderfully warm showers, did a couple of loads of washing and drying and had Chinese food.

Driving through Killarney National Park was a pleasure and we stopped at a few places to take in the beauty. 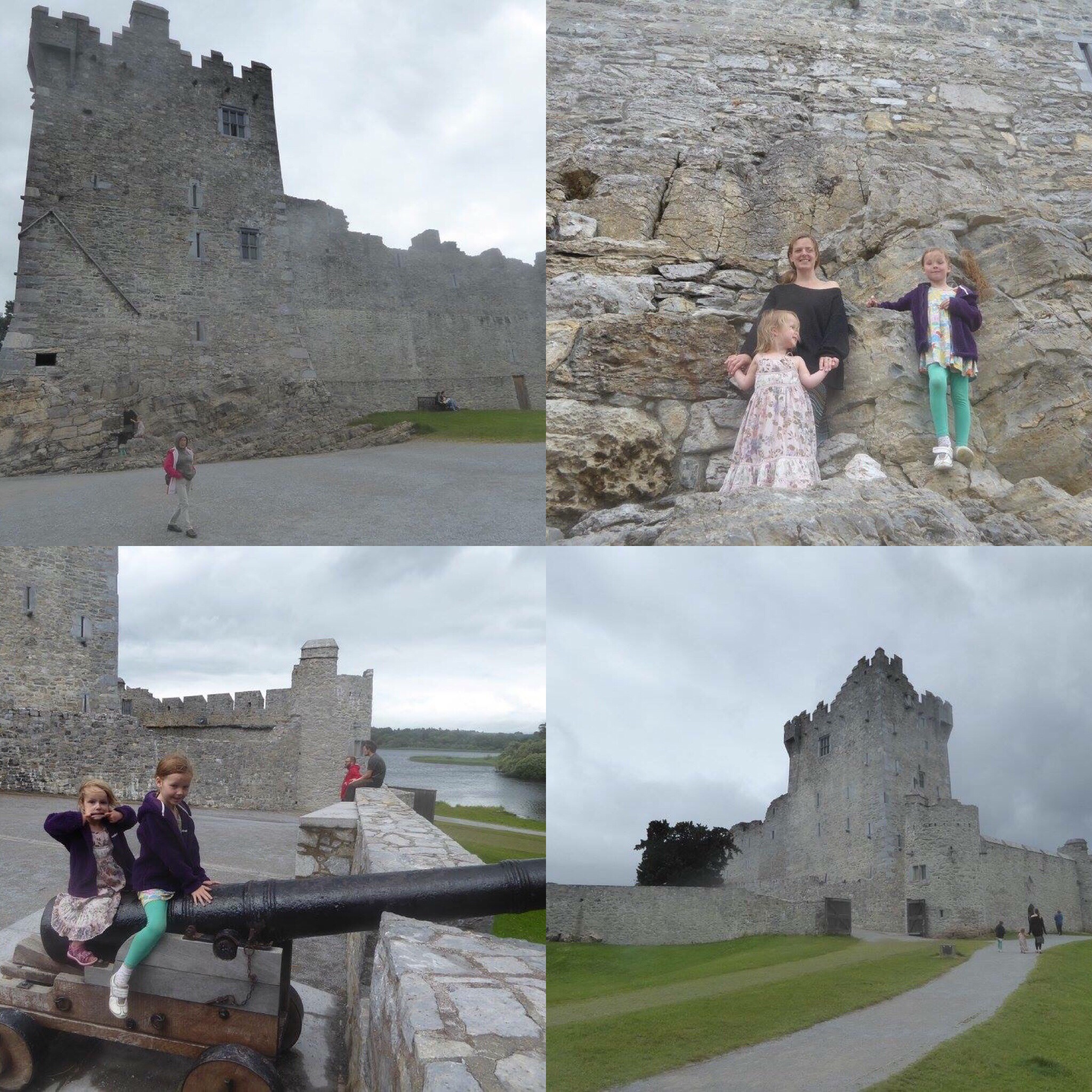 Ladies View, it was a bit foggy but stunning all the same. 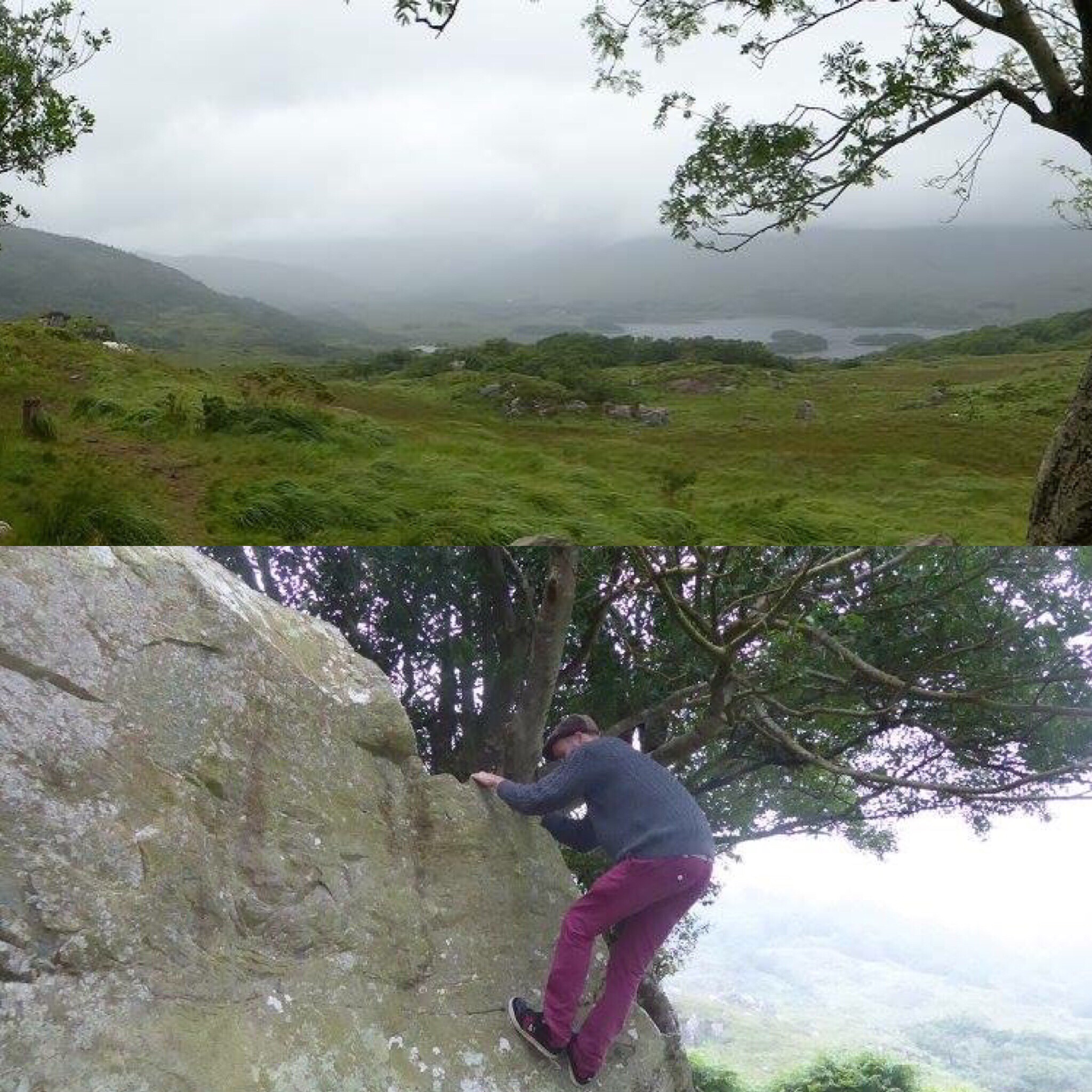 Torc Waterfall with a little play in the stream at the bottom.

From here to The Beara Peninsula. I was excited to revisit Castletown Bear and take the children on Ireland’s only cable car across to Dursey Island. But the Irish weather had other ideas. I really can’t tell you a lot about the drive on the Beara Peninsula because the fog was so thick you could only just make out the jaggered rocks that lined the roads. It felt cold and unwelcoming. We had no idea where we were going…then we came across a Tibetan Buddhist Retreat centre, what a sigh of relief!! We would definitely find the kind and welcoming faces we needed to see, here. We were very warmly welcomed to take a walk around the grounds and we stopped for a few quiet moments in a very peaceful mediation garden. Back on the road feeling somewhat more grounded, we stumbled upon a family festival in the Village of Eyeries. I knew my friends brother lived here so I was keeping my eyes peeled and by pure family resemblance I walked over to him and introduce myself! It was the right person! Phew! The villagers we having a big party in the village hall but the tickets had sold out. We got some chips from the chip van and went back to the van to cook a can of veg curry to have with them. We played cards and had an early night. Next we arrived in Bantry, and we were just planning our route along the Sheep’s Head peninsula when we had a sudden change of plan. I looked on Facebook and saw this…

My uncles band playing at a festival that night, in the village where my other uncle, aunt and cousins all live! ‘Shall we go?’ It was a further 1hr 30mins and it meant missing the last few of our planned stops! We went, and had a ball, everyone was so surprised to see us! We stayed parked outside my aunt and uncles for a couple of nights and totally enjoyed being with family and catching up and meeting my cousins new baby. The next day was a family fun day and the kids loved it!! We spent the next 5 days in Garrets town.

The weather was beautiful, the views were stunning!

It was the perfect end to our Wild Atlantic Adventure.

If you would love a Wild Atlantic Adventure of your own you can hire Dougal, fully equipped and insured for U.K. & European Road trips! Wishing you all Peace, Love and an adventurous life